The Mayor of London, Boris Johnson, officially unveiled the £180m extension of the Docklands Light Railway, from King George V to the new Woolwich Arsenal station on the 14th January 2009.

The 2.5km extension was designed and built by Morgan Est/Colas Rail joint venture with Halcrow, and was completed two months ahead of schedule.

Southdowns was commissioned in 2005 to assess groundborne noise and vibration from the scheme on behalf of the design and build contractor, resulting in the design and specification of mitigation measures in the form of resilient track systems. In October 2008 Southdowns was appointed to undertake ground-borne noise and vibration compliance monitoring during a scheduled System Performance Demonstration (SPD) as part of the commissioning phases of the project.

The scheme design includes three discrete types of ballastless track to reduce groundborne noise and vibration to specified magnitudes. These are: 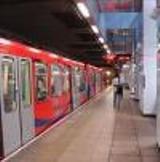 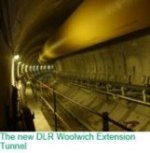